Japan under the Shôguns: Galleries

"The third shôgun, Tokugawa Iemitsu,... enforced isolation from much of the rest of the world in the seventeenth century, believing that influences from abroad (meaning trade, Christianity, and guns) could shift the balance that existed between the shôgun and the feudal lords. He was proven right two centuries later, when change came in the form of Perry's ships." (Asia for Educators, Columbia University, 2009)

Replace the following with the Victorian Curriculum General Capabilities from teacher's documentation on Rubicon Atlas.

Students will form some understanding of Japanese history and culture. They will come to understand the implications of contact between cultures and the threat caused to non-European cultures of European imperialism.

Scroll through the image collections and click on the image, or image title to go to the original online artifact and view the image in more detail.

"In the shadow of temple buildings in the upper right, armed warriors on foot and on horseback fight each other across a bridge. Two warrior priests fight nimbly on the beams, one jumping over the head of his comrade to get to the enemy. The armor and weapons­ primarily bows and arrows and long halberds instead of swords-date the story to a time well before the screens were painted. The battle depicted occurred in 1180 and was described in The Tale of the Heike, a literary epic about the wars between two samurai clans at the end of the Heian period (794-1185). On the right side of this screen are members of the Minamoto (Genji) clan, who have come out of hiding at a Buddhist temple to fight the warriors of the Taira (Heike) clan, on the left. The Minamoto side is defeated in this particular battle, but they triumph in the end, and become Japan's first family of shoguns." (Asian Art Museum Chong-Moon Lee Center for Asian Art and Culture, n.d.) 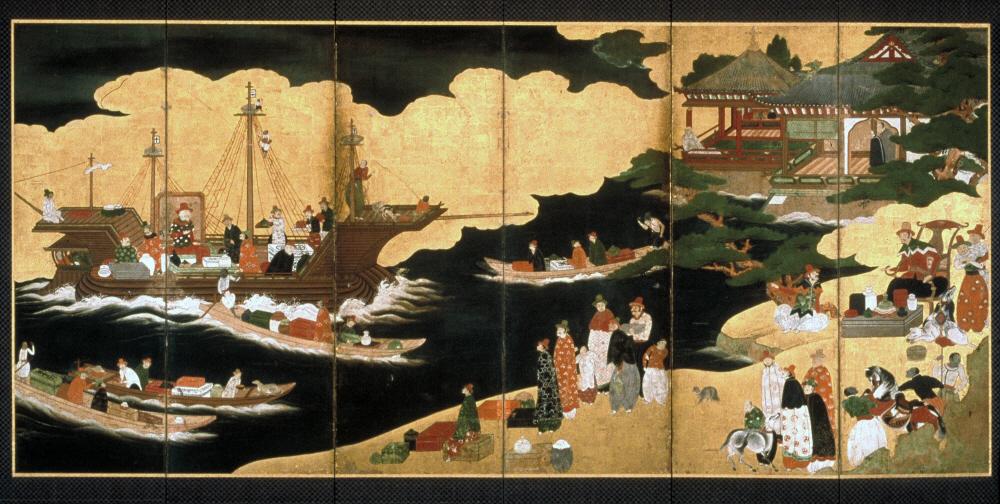 Arrival of a Portuguese ship (Nanban screen), one of a pair 南蛮屏風 江戸時代

"In 1543, three Portuguese travelers aboard a Chinese ship drifted ashore on Tanegashima, a small island near Kyushu. They were the first Europeans to visit Japan. In 1548, Francis Xavier, a Jesuit, arrived from Goa to introduce Christianity to the Japanese. Thereafter a stream of Portuguese traders and Jesuit missionaries came to Japan. The Japanese called them nanban (southern barbarians) because they sailed to Japan from the south. Portuguese merchants brought tin, lead, gold, silk, and wool and cotton textiles, among other goods, to Japan, which exported swords, lacquer ware, silk, and silver. The Japanese were fascinated by the Portuguese because of their ships, exotic appearance, costumes, language, and merchandise. They depicted these foreigners in great detail in paintings and screens. This work portrays the arrival of a Portuguese ship at the port of Nagasaki. On the left (shown here) are the captain and his crew, who have just landed; some cargo is still being unloaded." (Asian Art Museum Chong-Moon Lee Center for Asian Art and Culture, n.d.)

Scenes from the Nakamura Kabuki Theater

One from a pair of six-panel folding screens; ink and color on gold-leafed paper.

Amusements at the Dry Riverbed, Shijô

One from a pair of six-panel folding screens; ink and color on gold-leafed paper 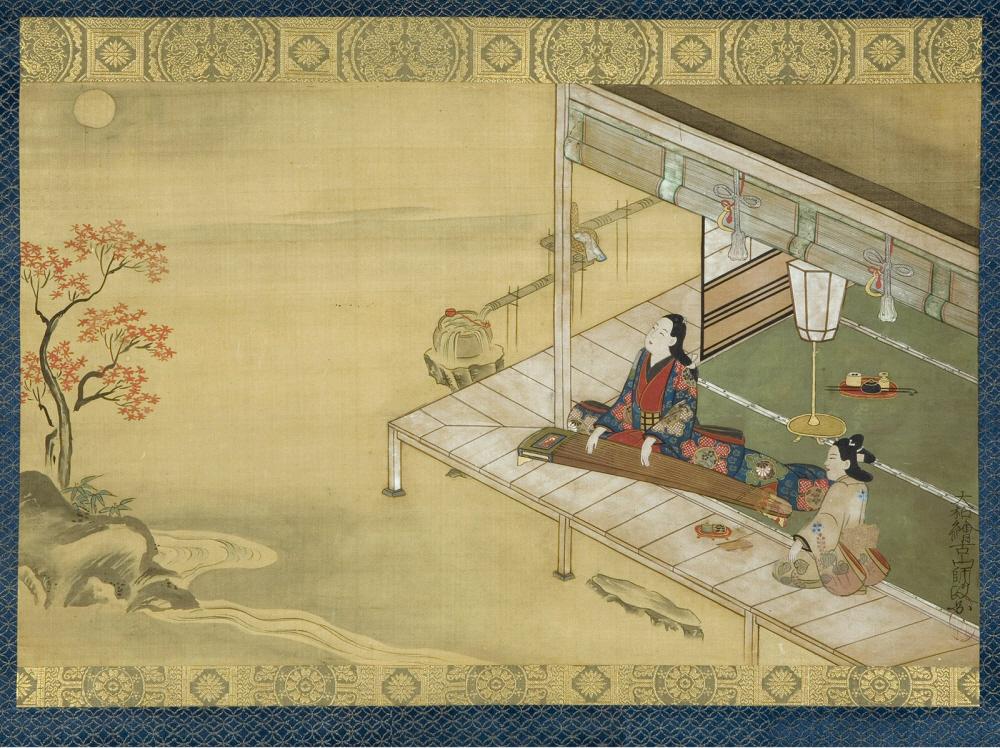 "Attended by a female servant, a young woman plays a Japanese zither (koto) by the light of a full moon. Arranged around the women are various accoutrements of upper-class daily life: elegant lacquered trays with smoking utensils and incense, a lampstand, and rolled bamboo blinds. This work belongs to a genre popular in the late seventeenth and eighteenth centuries, in which women in contemporary fashions are shown engaging in elegant pastimes. Here the setting recalls an aristocratic villa, while seasonal elements of a full moon and red maple tree, both associated with autumn, call to mind the traditions of classical poetry." (Asian Art Museum Chong-Moon Lee Center for Asian Art and Culture, n.d.) 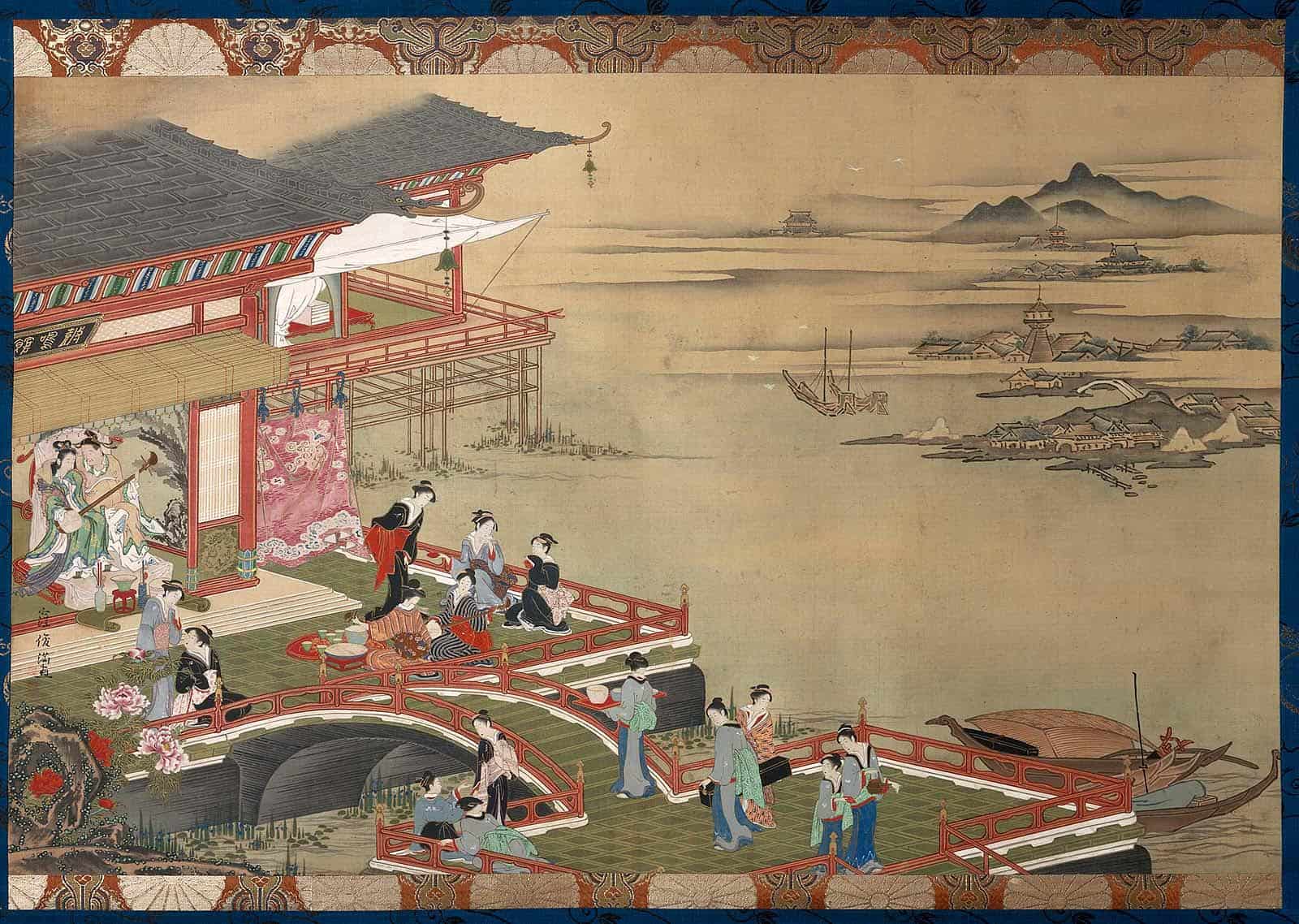 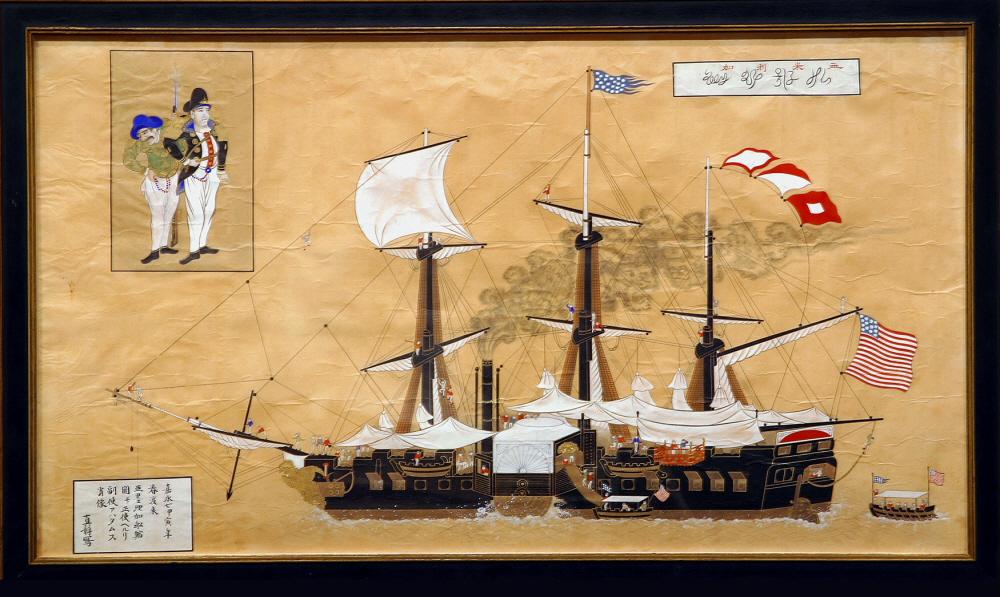 America: Depiction of an American Ship and Portraits of the First Ambassador Perry and the Deputy Ambassador Adams

"The subject of this painting is probably the USS Powhatan, Commodore Matthew Perry's flagship on his second expedition to Japan in 1854. The previous year Perry had come to Japan, delivered a letter from President Millard Fillmore to the shogun's officials, and left, promising to return. Perry's 1854 expedition, larger than the first, comprised seven ships. Inset at the upper-left corner are portraits of Commodore Perry and his deputy, Henry Adams. The black-hulled American warships, particularly the steam frigates that puffed smoke "like dragons," frightened the Japanese and at the same time fascinated them, no ship more so than the Powhatan, which had been built in Norfolk, Virginia, in 1852. The artist Shinsei, about whom little is known, depicted the warship in typical Japanese style, with flat planes and fine details enhanced by decorative patterns of ocean waves and rising smoke." (Asian Art Museum Chong-Moon Lee Center for Asian Art and Culture, n.d.) 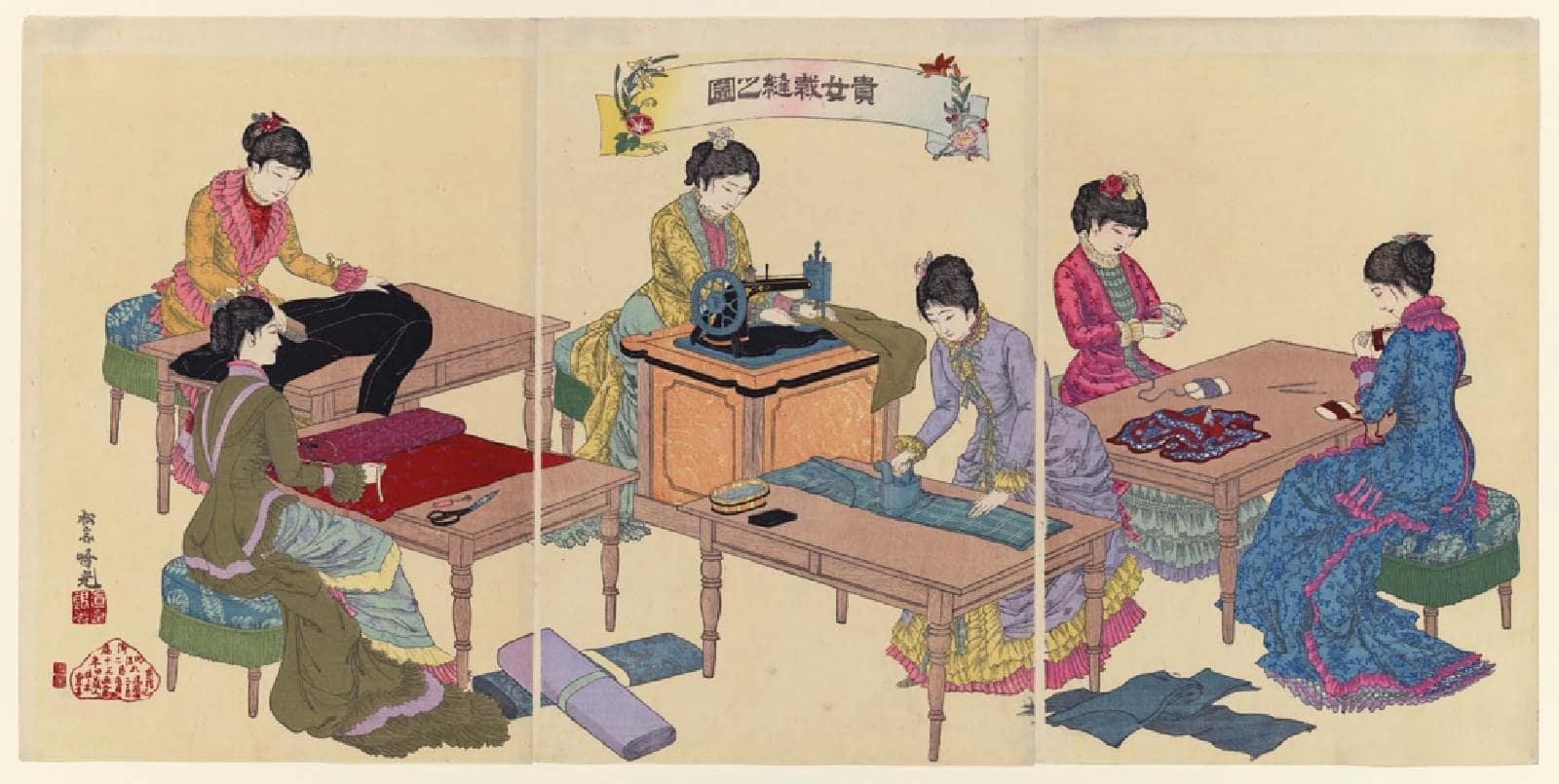 "After 1868 the Japanese government embarked on a program of rapid modernization intended to create an industrialized state on a par with those of Western powers. Improvements to the transportation network included the construction of a new railway line between Tokyo and Yokohama. Tens of thousands of spectators attended the inauguration of the new railway in the fall of 1872.

Demand for pictures of the new trains was high in the early 1870s. This woodblock-printed triptych features two steam locomotive trains near the newly constructed trestle bridge at Takanawa, in Tokyo's south end. Although most early rail passengers in Japan were Westerners, the artist playfully filled the two railway carriages at the right with Japanese women wearing elaborate hairstyles. Unfortunately, the beauties are at risk; their train appears headed for a collision with another coming from the opposite direction." (Asian Art Museum Chong-Moon Lee Center for Asian Art and Culture, n.d.) 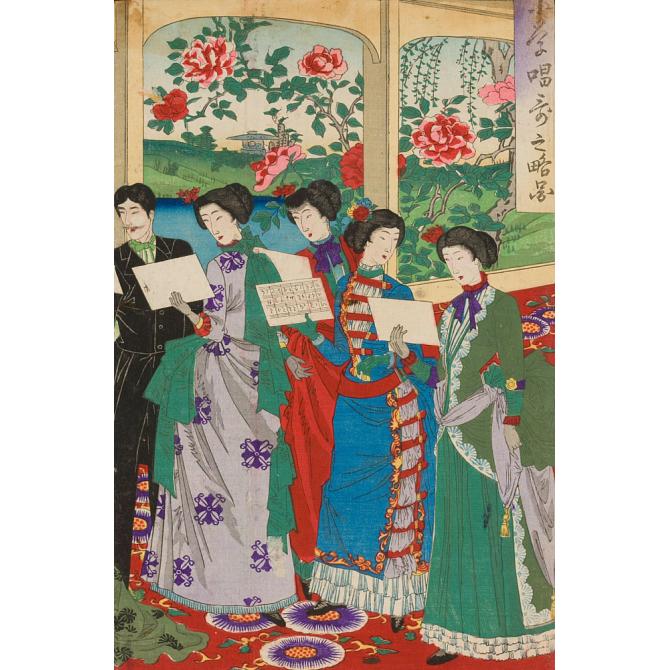 Picture of a Steam Locomotive along the Yokohama Waterfront 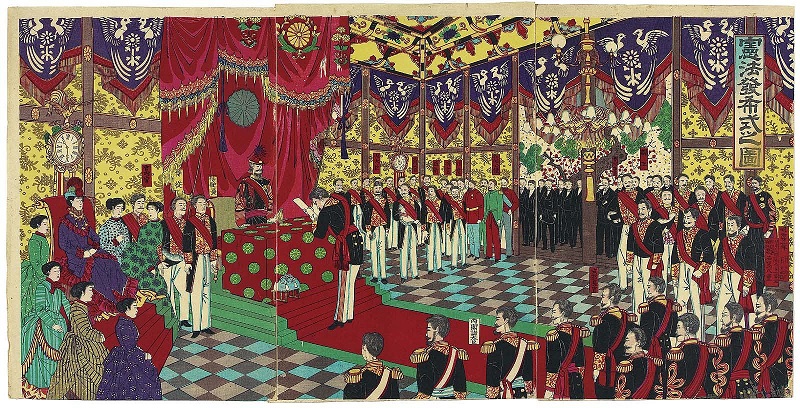 Illustration of the Ceremony Promulgating the Constitution (Kenpô happushiki no zu)