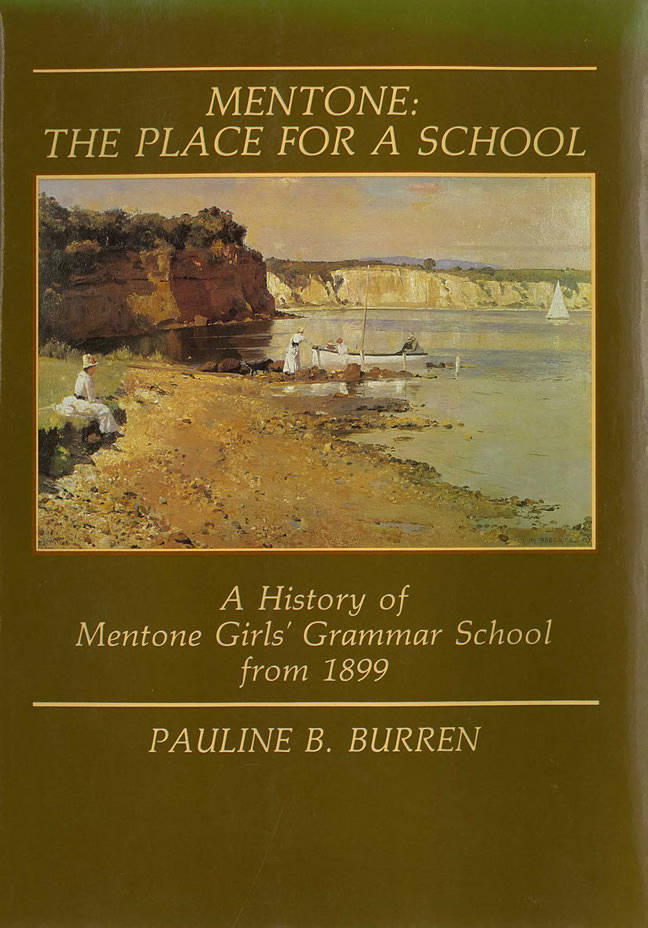 1899 A private school conducted by the Misses Simpson was opened at 'Cobbalanna', 100 Como Parade, Mentone and called M.H.S. Mentone High School for Girls or Simpsons' School. Effie Simpson was the first Headmistress and taught with her siste1·s Minnie, Ethel and Daisy.

1913 The school became co-educational with between 30-40 pupils.

1919 Miss Maxwell-Hyslop retired and the Simpson family, still owners of the property, convened a meeting of parents to form a committee to save the school, with Mr G G Downe as Secretary. Miss Ethel Simpson returned to run the school.

1920 The school moved to a new location in Venice Street when the Parents' Committee arranged for it to be the Mentone Branch of Presbyterian Ladies' College. Miss Evaline Mary Pearson was Headmistress.

1923 The Presbyterian Church Board decided to close the school. At a Public Meeting, debentnre capital was subscribed to form a company; a deposit was paid for the property now the site of St Bede's College.

School Song: The girls of the school were involved with the creation of the School Song and the Music Teacher wrote the music.

School Motto: VERO NIHIL VERIUS 'Nothing is truer than truth'. The position of Head Girl began in 1920, Prefects in 1924.

1927 After Miss Pearson resigned, Miss Bessie Johnston succeeded her as Headmistress during the difficult years of The Depression.

1928 The Old Girls' Club funded the Award of a Rhodes Prize for Citizenship. A School Identity had now been established.

She remained Headmistress until 1955. She was a member of the Headmistresses' Association of Victoria.

1936 Miss McCowan offered to purchase a suitable site for the school, when the owners of the current site foreclosed on the mortgage, and succeeded in buying a  property with  a frontage to Beach  Road. This was the Main (much later, "Old") House.

1937 Miss McCowan purchased another strip of land at the rear of The Main House. Playing fields were added and further extensions for classrooms. The school was recognized as a Day and Boarding School.

1940 World War 2. All school children were involved in evacuation procedures in the event of enemy attack. Slit trenches were dug in the school grounds and regular practices were  held to familiarize staff and girls with procedures with the air-raid shelters. In 1943 enrolment was 132 and in 1944 150 girls. An ex student tells stories of gathering eggs from a chook pen to provide a healthy breakfast for the boarders. The School donated fresh eggs to the Hospital Appeals throughout the war period.

During this time the school was linked to St Augustine's Church of England, Como Parade, Mentone. "Spindrift" publication lapsed.

1940 Kent House created; named in honour of the Duke of Kent who was killed during the War. Youngest brother of King George VI.

1951 The school now had the use of 4 acres of land, 10 classrooms and a boarding house.

1958 A large adjoining house was purchased to provide a Kindergarten and Classrooms.

1962 The School became affiliated with the Church of England and the Bishop's Mitre was added to the School Crest in 1963.

1969 Mccowan House created; named in honour of Miss Jeannie McCowan. 1974 A Thanksgiving and Dedication Service was held to commemorate the

Golden Jubilee of the School. The School had completed a successful

1978 The Middle School was established. A new Kindergarten was opened. 1979 The Founders' Wing for Senior students was opened.

1980 A Board of Studies was established.

1986 The David Hunt Centre was opened, comprising a gymnasium, music school, classroom and specialist facilities. Extensions to the Middle School, the Kerferd Library and Administration were completed. Enrolment : 830 pupils.

The satellite project expanded to allow languages to be received directly

from Europe and Japan.

1990 The tennis courts and hockey field were relocated. A second computer facility was created and the building of the Visual Arts Centre began.

1992 A third computer facility was completed. The Simpson Visual Arts Centre was opened by the Honourable Lindsay Thompson, son of Miss Ethel Simpson.

1993 A Community Education Program was established: named the Mentone Centre for Continuing Education.

1994 The School celebrated its 95th Birthday with special School events. The Early Learning Centre for girls & boys opened in February.

1995 A major renovation and upgrading of the Science facilities was completed. Laptop computers were introduced  into classrooms.  The School launched its policy on the education of the Gifted and Talented.

1997 The Janice Douglas Junior School Building was officially opened by the Premier of Victoria, the Honourable Jeff Kennett on 23 May. Students

commenced classes in the building at the start of Semester 2 in July.

1999 The School Crest was simplified, with the "scrolling/leaves" removed.

2002 The Master-plan 'Envisioning the Future' was launched. 2003 New uniform launched - It's Red.

2006 Opening on September 6th of 'Cobbalanna' Senior College by Mrs Noel Waite AO in the presence of direct descendents of the school's founders (including Murray Thompson MP for Sandringham, grandson of Ethel Simpson); built on the original site of The Main House, Beach Road, Mentone.

Dedication Ceremony to mark the re-location of the  Centenary  Rose Garden and Centenary Time capsule to the Rose Courtyard June 25 2008.

2013 Years 9 and 10 Global Learning Centre (GLC) ready for use at the start of Term 1. Official Opening on Tuesday March 19th•

Work commenced on the Wellbeing Centre, adjacent to the gymnasium.

Demolition of the Sustainability building begun in December, which will include Junior School playground improvements.

Anzac Memorial Garden Bed established in the Willow Courtyard. The small bay tree, which replaced the aged, original willow tree, has been removed, to be replaced by a Lone Pine at the Anzac Day Service on April 24th. Flanders poppies and rosemary have also been planted.

(The Lone Pine will replace the one removed for the construction of   the Wellbeing Centre.)

Small changes made to the School Crest, to enhance printing.

Stage Two Renovations of the David Hunt Centre (Music Department)   began in May.

2017   Learning Support Centre moved from the Library to a house at 87 Beach  Road next to Cobbalanna, the backyard of which was incorporated into the landscaping of the Willow Courtyard. The area vacated in the Library became the Anne Forsell room (3rd location in the Library) for Senior  Student study Wellbeing Precinct Stage 2 Launch held on Friday April 28 in the Mind  and Body Studio. Sods officially turned. This stage will incorporate a  swimming complex and outside sports areas.

Refurbishment of the Jubilee Theatre in November.

Refurbishment of the Willow Year 5 classrooms.

Christmas holidays: enhancement of the Science Block and GLC

Revamped sports fields opened for use.

Q. What is this? A. Australian education vocabulary metadata in RDF/XML format.